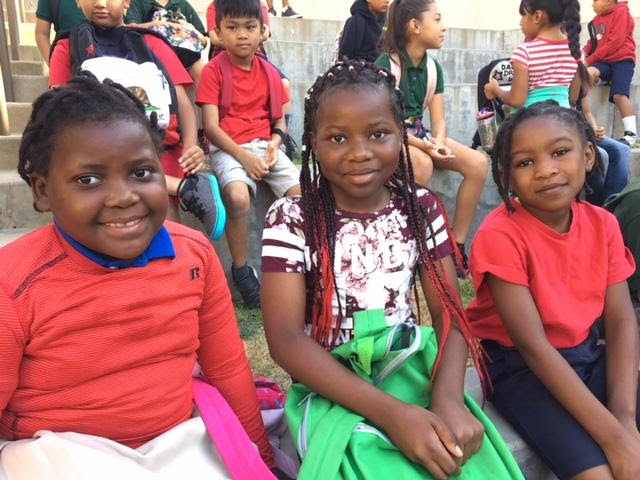 After traveling more than 14,000 miles before arriving at Empower College Prep, Laimon and his 5 siblings are doing everything they can to stay at the school.

“They don’t have rent money,” said Charlotte Christian, a volunteer who works with Laimon’s family and others in the refugee community. Christian is concerned the family will be forced to move. She has been advocating with the International Rescue Committee for the students to stay at Empower regardless of where they live, and the IRC has agreed.

“When I met him he was almost mute and couldn’t communicate,” Christian said. He was attending a school near where he lived at the time. “Laimon was constantly bullied and made fun of because he couldn’t read or write and was in 10th grade.”

“The teachers would hit us with sticks,” Laimon said referring to his experience in the Democratic Republic of Congo. “We learned in fear.”

But the violence from teachers was not what compelled Laimon to flee his home. The massacre of his neighbors did.

In mid-2016, a tribal leader called for an insurgency against the Congolese government when it refused to recognize his authority in the Kasai region of the DRC. The resulting violence displaced 1.3 million people and killed 4,000, including Laimon’s neighbors. Laimon and his family fled through the jungle and was brought by the International Rescue Committee to the United States about 2 years ago.

Laimon’s younger brother Enoch says the the jungle was scary for his family. One of his brothers was lost by himself for more than a month. They still show the effects of trauma.

“The animals in the jungle were not pets like we have,” Enoch said. “They eat you!”

When Laimon and Enoch arrived at Empower College Prep, they were joined by about three dozen other refugees who contributed to a surge in the school’s English Learner population last year that jumped from about 14% to more than 26% of the school’s 680 students.

“Our refugees make our student population more diverse, more rich,” said the school’s founder Brian Holman. “They don’t make our mission of getting every student to college any easier, but that make it more meaningful. We tell our students to change the world–our work with refugees is one way we try to do that.”

“They have made great progress and respond to nurture and care,” Christian said. “It’s the first time these kids have had a chance to be included in school. We can’t let it fail because parents aren’t able to adjust. I am so grateful for the work Empower College Prep does.”